It took a pandemic for many nonprofit organizations to break out of their comfort zones when it came to technology, as in-person programs pivoted to virtual programs. Coupled with an eager and growing number of volunteers, AHRC New York City developed a successful model for the many people with disabilities it supports.

Zoom, FaceTime, and other programs kept people with intellectual and developmental disabilities and their families engaged in a new type of programming, focusing on virtual volunteers from across the U.S. and abroad. Volunteers are currently offering more than 60 weekly classes, in addition to nearly 80 biweekly interviews for people seeking employment. The average class draws 20-30 people. From Broadway Dancer to Promoting Health

After 17 years of wowing Broadway audiences and crowds around the world in shows including Cats and La Cage aux Folles, Johnny Anzalone has transformed himself, focusing on teaching and a more holistic side of life. He brings his energy and enthusiasm to AHRC NYC’s Chair Yoga and Mindfulness class.

“Come on! You’ve got this! Yes!” are just some of Anzalone’s choruses in his weekly class. He has taught virtually from New York, Florida, and even Louisiana while visiting his family.

In between exercises with weights, water bottles, or rubber bands, Johnny encourages the people to do their best and accept the rest – a valuable mindfulness practice he has adopted. This applies to all aspects of life, he said. “Outcomes can often be not what we expect, so practicing acceptance helps us not judge a situation, but brings understanding,” Anzalone said.

He rarely misses class, knowing the importance of routines to people with intellectual and developmental disabilities. One of the students, Ned Bealy, emailed Karen Zuckerman, AHRC NYC’s Director of Volunteers and Corporate Engagement, asking, “Could you find out from (Johnny) and let us know by email if we will be having Thursday chair yoga class? It’s not Thursday without Johnny.” 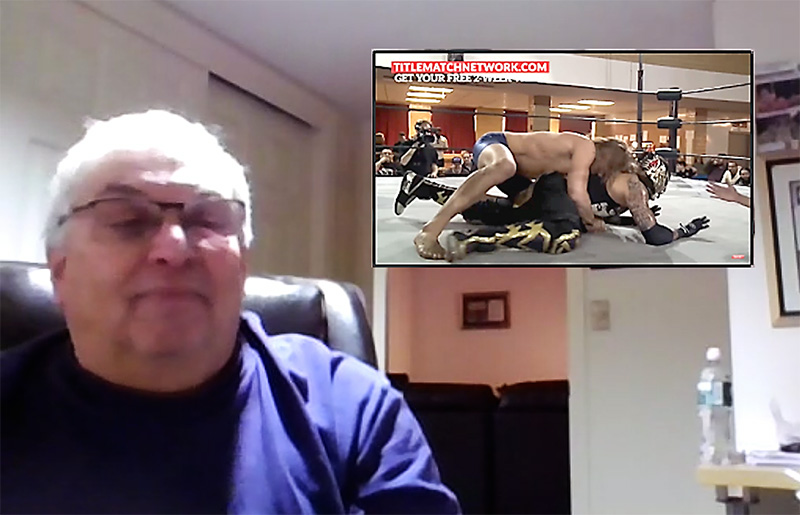 Les Mildenberg shows a match during his Wrestling Group

From New Hampshire, Les and Ida Stanger-Mildenberg have their own unique following. Ida’s stepson, Jonathan Zalman, had volunteered to teach chess at AHRC NYC. He thought she and Les would enjoy remote volunteering. Today, Ida takes people around the country, providing virtual tours of different states. “Did you know the Piggly Wiggly in Oklahoma was the first supermarket in the U.S.?” she asks. Having completed all the states, her program is now called, “Name that Country.”

After working in food sales for Sysco’s national accounts in Boston, Ida took a liking to volunteering. Zalman helped her grow accustomed to Zoom. “He would shadow me a few times, as I’d go on YouTube to show a subway ride, the Oklahoma State Fair, or the Florida Everglades,” Ida said, adding that volunteering is fulfilling.

After watching his wife’s experience, Les decided to volunteer. Les has a large, enthusiastic following with his wrestling group each week.

“I try to give them a little background and relate it to what’s going on today,” he said. “Most of them get it. It’s OK if they want to talk over me … anything that engages them is going to be good.” 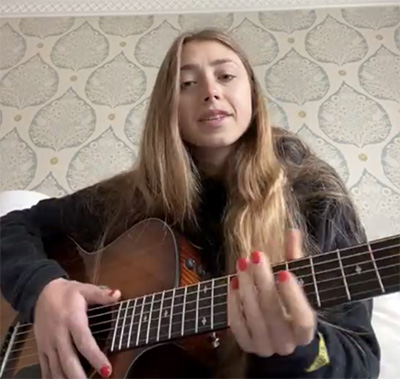 In-person book clubs had been extremely popular across the boroughs. Volunteer Csenge Bodi was a college student planning a trip home to Transylvania, Romania for the holidays last year. Trouble was how to complete The Call of the Wild. “I didn’t want them to miss all that time and not finish the book,” said Bodi, who was a sophomore at St. John’s University. So, at 6 p.m. in Romania, she conducted the 11 a.m. EST Book Club. After explaining why it was dark in Romania, Book Club resumed without a hitch. “It’s just as much a joy for me as it is for them,” she said. “It’s relaxing and makes an impact on their life and mine.”

Staff throughout AHRC NYC programs delivered more than 700 tablets, iPads, and smartphones to the people they support, so they could be connected.

“This was such a widespread effort,” said Andy Pfadt-Trilling, AHRC NYC’s Director of Quality Improvement with Adult Day Services. “Staff at all levels delivered items from programs to people’s homes. No one asked. It was just their sense of duty and about the relationships they had.”

Technology was the key to enabling the people AHRC NYC supports to see their friends while attempting to establish a routine. It brought comfort to families and their loved ones.

Jose España, AHRC NYC’s Quality Assurance Compliance Transportation Manager, was one of many staff to deliver items to people with disabilities and their families. “Every stop I made, every family I visited, touched my heart. When they see you, they see hope, they see help and some kind of rescue.”

Providing the technology to the people AHRC NYC supports was rewarding. “They’d sometimes ask, ‘Is this for me? Now I’m going to see you guys,’” España said.

“The people we support were so happy to get on Zoom,” Zuckerman said. “They were all together and socializing. They didn’t feel so alone.”

“This never could have happened without the tremendous efforts of our staff throughout AHRC NYC providing the technology and support during our volunteers’ programs,” she added.

Health and social service agencies, and the nonprofit sector generally, rely on volunteers to advance their missions and to ensure their continuing viability. As nonprofit organizations (NPOs) must compete for […]

Help Stand for Science Within the Autism Community: Showcasing the Externship of the Association for Science in Autism Treatment

September and October were two of the busiest months of the year here at The Substance Abuse and Mental Health Services Administration (SAMHSA). Each September, we observe  by celebrating a strong […]

When a call for support goes out at the onset of a disaster, we commonly recognize the basic needs: shelter, food, water, clothing. Behavioral health needs – mental, emotional, and […]

The Many Benefits of Volunteer Programming

Like many nonprofit organizations, The Bridge welcomes volunteers who are willing to donate their time and expertise to further our mission and enrich the lives of our clients. Founded in […]