When we think about the suicide of a loved one, we think of profound loss, of grief, of finding a way to endure amid unyielding pain. But we gain something in the aftermath, one nearly as burdensome. It is a new perspective: Loss becomes a lens through which life is lived. And it can be difficult for many to see through the blur. 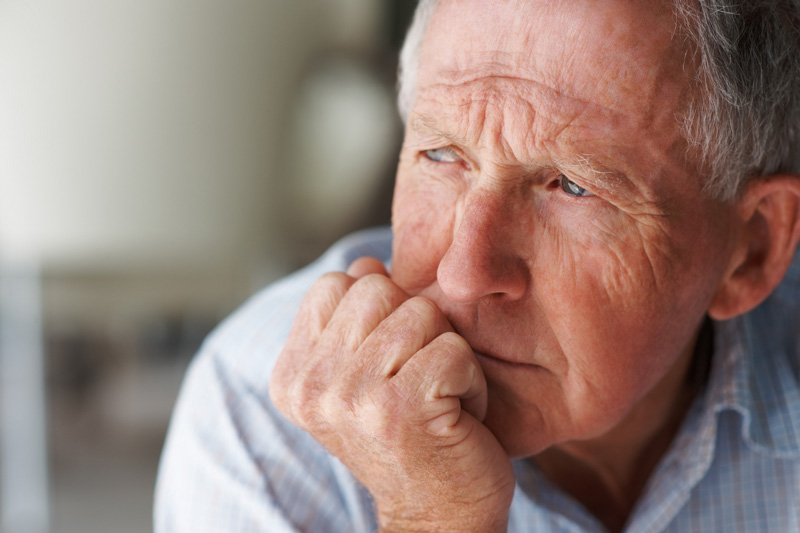 For three members of The Mental Health Association of Westchester’s Board of Directors, much as with anyone who has suffered the loss of a loved one to suicide, that lens is ever-present. Their success in regaining clarity has been mixed.

The phone call 8½ years ago that changed Sean Mayer’s life forever was not exactly unexpected. His brother, Ryan, had suffered from an array of mental health challenges for 20 years and had attempted suicide three times. The difference this time was that he had succeeded.

Mayer for years had told his wife that he thought his brother would die by suicide one day. He spent those years steeling himself for that seeming inevitability.

And yet, when the call came, Mayer, a longtime editor who prides himself on attention to detail, realized that no amount of preparation could have readied him for that loss. Nor could it have prepared him for the reality that loss – and the potential for loss – would become such a focal point. 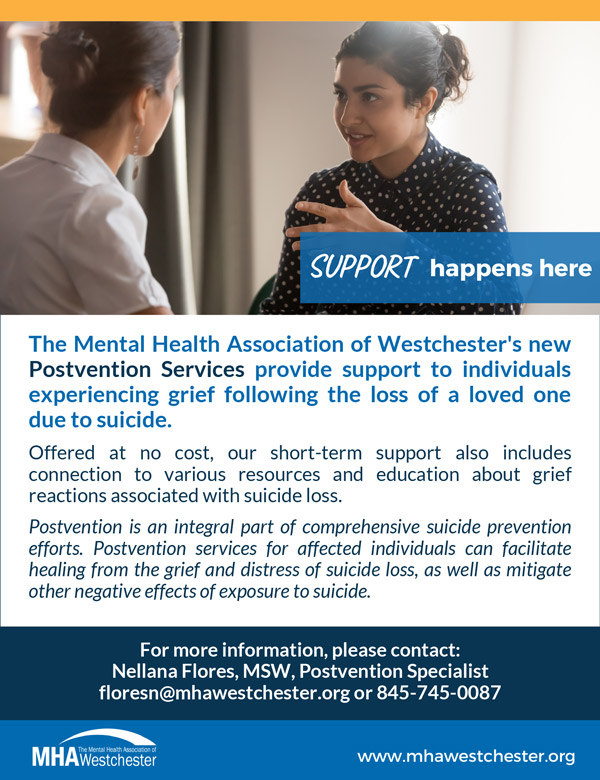 “My parents and their sanity became my singular focus,” he said. “I needed to get them through a pain that can’t possibly go away to a reimagined existence where it is OK to live and even to laugh. I didn’t have the time or the energy to do my own grieving. But I didn’t know any other way.”

Since his brother’s death, Mayer alone has been responsible for helping his parents – a mother nearby with increasing and worsening health issues and a father leading an isolated existence 1,300 miles away in Florida – navigate the hurdles brought on by aging. “For someone plagued by his own depression and anxiety, it can be exhausting,” he said. “But what is truly draining is the fear that history can repeat itself.”

Mayer’s oldest son, 16, suffers from anxiety and obsessive-compulsive disorder. He does very well in school despite his difficulty studying, and he has a girlfriend and close friends. But he is prone to bouts of exhaustion and moodiness. Mayer said he and his wife are rarely at ease.

Meanwhile, Mayer’s identical twin sons, 13, excel in school – seemingly no grade below a 95 is acceptable despite their parents’ protestations to the contrary – and they are talented musicians, with both already targeting Juilliard for college. There will be countless auditions, and the pressure and competition will be ratcheted up. Mayer fears they will burn out – and then what?

“That lens of loss, or potential loss, is like a cataract – it clouds all that I see and do. But a cataract can be removed; that lens will be with me forever. I ache for just one day of unimpeded vision.”

Jeanette Fairhurst’s daughter, Ali, was 23 when she passed, with the only warning to family of expressed suicidal ideation coming once, five years earlier. Fairhurst, her husband and their son were together when they heard the news and bonded by getting Ali’s pets from her apartment. Fairhurst’s son led the way in being open about Ali’s suicide on social media. They chose to celebrate her life at her funeral alongside speaking about her intermittent struggles with depression.

Fairhurst knew she had to continue to see joy amid her loss. “I will always be a mom to both my son and my deceased daughter,” she said. “To be effective, I create space for living and grieving.”

There is no right way to grieve, and the Fairhursts respected their differences while trying to help each other and consulting professionals for help. Her husband and son were more inwardly focused, but being a scientist at heart, Fairhurst needed to learn and share her experience to prevent similar outcomes. Within a few months, she attended MHA Westchester’s first-ever Community Conversation, where Mayer moderated a panel on suicide prevention.

“Hearing directly from those surviving the loss of family and those who had attempted suicide was painful but so helpful,” Fairhurst said. “There were recognizable elements that made me feel connected.”

Building an association with MHA Westchester has helped Fairhurst heal and uniquely honor her daughter while helping a vital organization. A Sock-It-To-Stigma raffle brought a fun twist while raising funds and suicide awareness, and Fairhurst brought suicide prevention classes from MHA Westchester to her workplace. The presentations sparked her founding of the Regeneron Resilience Is Essential (RisE) employee resource group. What started as sharing resilience strategies evolved to include sharing mental health challenges and fighting the stigma of those challenges at work. It has been a ground-breaking outlet for the group’s 600 members to help each other and themselves.

Fairhurst shared that, to let joy and grief coexist, she views others with more empathy. Often, others feel ashamed for bringing up their “little problems” to her. But she believes all problems are valid and need to be addressed for healing to occur.

“The grief of a son or a grandmother is no less important than that of a mom,” she said. “We need to find ways to live life fully as families and yet let ourselves grieve individually or together to be our best selves for each other.”

Yvonne Tropp has faced many losses in her long life, including two husbands. But the loss of one of her grandsons, Nick, to suicide in 2018 has brought a different challenge: helping her daughter and Nick’s brother with the lasting effects of Nick’s loss while keeping her fond memories of him alive.

Nick grew up with Asperger’s Syndrome. At the conclusion of his senior year at a private high school, he spoke from the stage of the school chapel, telling everyone about the ups and downs of his life for the first time. He had attended therapy sessions for many years.  At the conclusion of his talk, many students praised and hugged him, then wished him well in college.

He was about to graduate from college in December 2018 when an unexpected situation overwhelmed him. He told his Reformed University Fellowship (RUF) friends that he planned to stay in his apartment after graduating, then enter graduate school that September. They told him that, as a college graduate, he would not be able to continue to participate in RUF events, as it is an undergraduate campus ministry.

“He did not call his mom to let her know this,” she said. “If he had done so, she would have told him to take two more courses and graduate the following June.” Instead, without communicating with her, he died by suicide on campus.

Tropp remembers that the college staff was supportive and got her daughter and son-in-law to smile a little. During the memorial service on campus, many students attended and talked about Nick fondly. A few years later, a wonderful memorial space overlooking the water was built with Nick’s name engraved, and there were fond remembrances from his RUF friends.

Tropp sees the effects on the family. She knows her daughter will never get over Nick’s loss despite having a supportive therapist. They still go places Tropp loves, places where they were previously very social. But her daughter doesn’t feel like socializing much now, and this limits their interaction with others. Meanwhile, Nick’s brother was very close with him and won’t talk about his loss. Tropp said he is hugely upset and misses his brother enormously.

Still, Tropp relishes the time with her daughter and grandson. She tries to keep them smiling more than crying.

Tropp knows her grandson is smiling down, while she is smiling up at him. She chose to share what Helen Keller once wrote about creating memories: “What we have once enjoyed and deeply loved we can never lose, for all that we love deeply becomes a part of us.”

Jeanette Fairhurst, Sean Mayer, and Yvonne Tropp-Epstein are Members of the Board of Directors of MHA Westchester.

Applied Behavior Analysis as a Treatment for Survivors of Trauma

Understanding trauma has become a major focus for many different fields of mental health, with each proposing a different strategy for addressing traumatic symptoms and core issues. This has not […]

It is important to start with the understanding that everyone thinking about and desiring to have a family is not only with great expectations but with many hopes and aspirations. […]

Federation of Organizations: A Family Affair

Families have been and continue to be instrumental in the development and implementation of treatment and support options for people with mental illness. Founded by family advocates, for the last […]

From the Shadow of COVID, a Bright Emergent Resource: Crisis Stabilization Center

When you think about those at the forefront of managing mental health concerns – psychiatrists, psychologists, therapists, counselors, and other professionals may come to mind. However, former Surgeon General Dr. […]