I walked into the “survivors of suicide” group physically aching and emotionally doubled over in pain. The group – people who’d had a loved one die by suicide – sat in a circle of folding chairs in a pleasant if nondescript meeting room. This was my first visit, a trial effort at relief suggested by friends who’d watched me stumble through a year of grief. The leaders laid out the ground rules for speaking (be sure the person speaking before you is fully finished before you start, do not mention the means of death in your account of what brought you here) and the attendees began to talk. 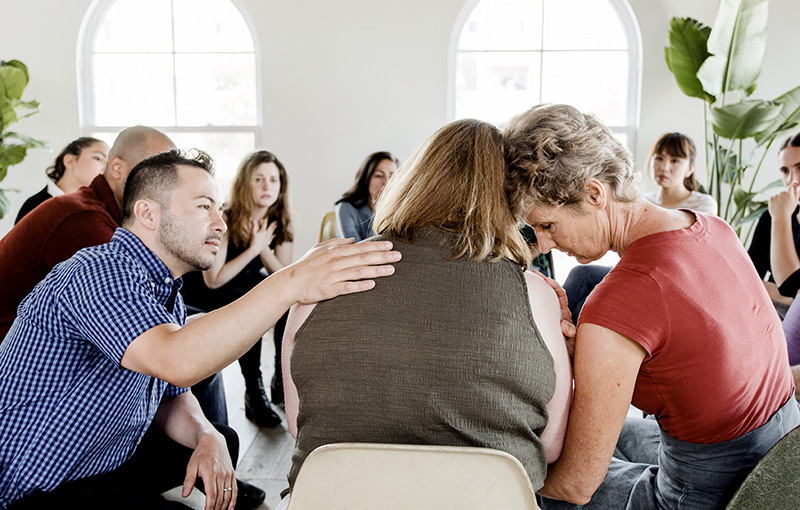 Rivers of pain poured from the participants’ lips. Visible, palpable pain flowed from the daughter whose father left the dinner table never to sit down with them again, from the husband whose wife waited for him to visit his ailing mother to end her life, from the lover who’d committed himself to death instead of the future of their relationship, from the young man whose brother never came home from college. The room throbbed with grief.

The stories described the variety of losses and, simultaneously, revealed the uniformity of the agony that all those different deaths brought to those left behind. When I’d arrived, I’d imagined that I’d be the most to-be-pitied. It was my son who’d committed suicide, and everyone knew that the death of a child was the worst possible loss. The conviction that I was the winner of this perverse prize, however, crumbled as I heard the others’ experiences. To have your parent commit suicide – oh my god – what could be more devastating to your own sense of worth? To be jilted by a lover through death – could there possibly be a more thorough rejection? To lose a sibling while still so young, when one needed a benign world to look forward to, how could one develop any sort of constructive life plan? All of the experiences described were immeasurably horrible. There was no hierarchy of pain.

People seated throughout the room offered supportive comments as each person spoke, but by and large people presented their stories in the order in which they were seated. Two chairs away from me, a woman in her late twenties shuddered with grief as she told the story of her mother’s death. We shook our heads and wept with her. Then her voice grew loud and angry. She’d been advised by the funeral director organizing her mother’s funeral to write an obituary for the local paper, a small publication suitably sized for its small town in upstate New York. When the editor received her carefully constructed obituary, he called to tell her they didn’t publish obituaries for people who’d committed suicide. He wouldn’t print it. She should use Facebook, he suggested, to notify people of her mother’s death.

The room rustled with sympathetic anger. Others began to speak, out of order and loud, and now the stories told of the insults added to the pain of loss. The newspaper editor was one among many: in-laws, friends, immediate family all found ways of conveying the unacceptability of suicide, the wrongness of it, its transgression of the rules of proper society. Don’t tell your boss your wife killed herself when you ask for time off, someone’s co-worker advised. The messages of sympathy that people received carried mixed messages: no one in my family ever died this way, so I’m really, really, really sorry about your loss. You’re probably going to need a therapist to help you get through this death, friends counseled. Overtly and through innuendo, people had reminded these poor souls of the impropriety of their loved one’s death. Shame echoed around the room. Shame and anger.

Listening, I realized I felt differently. Somehow, I’d survived my son’s suicide with only the pain of his loss and the pain of his pain. For whatever reason, I felt impervious to the implication that I should be embarrassed. Perhaps it was the years of our son’s adolescent anorexia that taught me how useless other people’s understandings—or misunderstandings—of a person’s sufferings could be. Perhaps I’d been so preoccupied by fear of my son’s death through anorexia that I’d lost track of other people’s opinions. It seemed I had reflexively discounted the stigma proffered by the outside world. Somehow, beyond my own consciousness, I’d learned that other people’s condemnation was best ignored: it wasn’t helpful, it wasn’t relevant.

When it was my time to speak, I recounted my husband’s and my interview with the priest who conducted our son’s memorial service. Ostensibly sympathetic, he opened our discussion with the information that until a few decades ago, priests of his church (Episcopalian) were not allowed to hold a service for a suicide victim. Why had he mentioned this? If he was willing to do the service, did he need to tell us of the recent – current? – unacceptability of our son’s means of death?

I told the story to the group but told them that the priest’s implied reproach hadn’t stuck. I’d forgotten it until tonight, when the people in this room told their stories of shaming. As I talked, I felt my message develop: please don’t let people get to you! Don’t let them shame you. I felt compelled to explain to the people in the room that the insult of stigma was an additional, unnecessary source of pain.

Stigma, to be honest, is just one of the extra layers of pain for those who’ve lost someone to suicide. In addition to the stigma of shame, there’s the agonizing uncertainty about whether the one you loved knew, really trusted, your love. And there’s the horrific knowledge that the person you loved suffered a depth of pain that most of us can only imagine. Every loss is painful, and complicated, but the loss of someone by suicide carries more weight in those extra layers of pain.

But stigma is something you can do something about. At the meeting, many people murmured approval of my combative stance toward stigma, perhaps having gained some relief from a fresh perspective. Their comments reinforced my conviction that we need to speak openly about suicide. By hiding it, you’re supporting the notion of its unacceptability. It’s important for people to know about suicide so they can learn how it comes about, uniquely for each person. You can’t learn about something you’re running away from. Let people know. Let them learn. Stigma is something you can do something about.

At the end of the meeting, I left, my face still wet with tears, but with a mission.